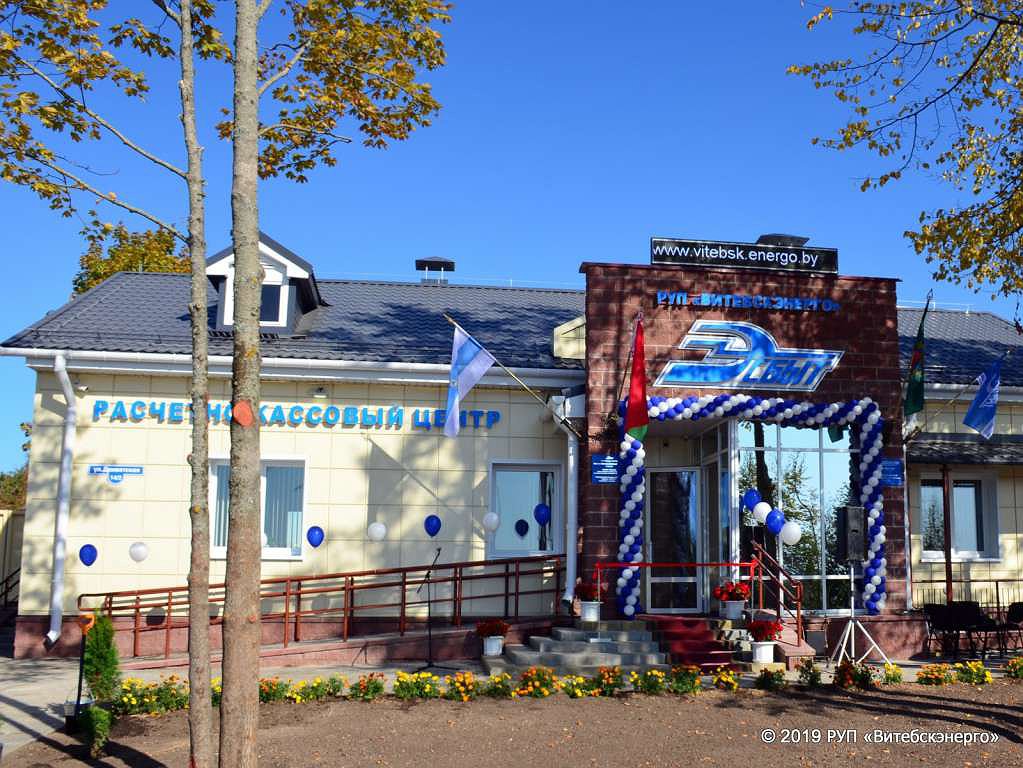 A good tradition of the power engineers of the Vitebsk region has been the annual opening of a new cash settlement center of the Energosbyt branch for the regional festival-fair of toilers of the village of Dazhinki. This year, a new RCC appeared in Braslaw.

Earlier, the Braslavsky district production and sales site of the Energosbyt branch was located in an administrative building, which was limited in size, jobs and places for receiving citizens did not meet modern service standards and did not allow to fully carry out the functions and tasks of the energy sales unit, and to quickly and efficiently provide services to consumers.

On September 27, the ceremonial opening of the RCC was attended by Viktor Zhitkevich, Head of the Energy Sales Department of the Belenergo GPO, Alexander Bodanin, Chairman of the Braslav District Executive Committee, Pavel Kharitonov, Deputy General Director for Sales of Vitebskenergo, Gennady Titenko, Director of Energosbyt Branch, as well as other managers and employees services and units of the enterprise.

Viktor Zhitkevich, Head of the Energy Sales Department of Belenergo, noted that the opening of such centers has already become traditional and is a continuation of Belenergo's policy to improve the quality of services to citizens and legal entities. The service area of ​​the Energosbyt branch of RUE Vitebskenergo in the Braslav district is quite extensive. It includes 593 settlements, more than 16 thousand consumers and over 18 thousand means of settlement accounting. Therefore, a new modern cash settlement center was needed here.

Deputy Director General of RUE “Vitebskenergo” Pavel Kharitonov emphasized that the work of the RCC makes it possible to ensure the availability of connection to the electric networks of the power system, transparency of relations between the parties under energy supply agreements, and the introduction of information technologies in interaction with consumers. And the focus on the common areas of such units as Electric Networks, Energosbyt and Gosenergogaznadzor makes it possible to efficiently and promptly serve citizens and legal entities, since the whole range of issues is resolved in almost one place.

The new settlement and cash center operates at convenient hours for visiting, including evening hours (on working days from 8:00 to 20:00) and Saturday (from 8:00 to 17:00). Entrance to the building allows unhindered access for visitors, including people with disabilities.

To receive citizens on issues of payments for electric energy, jobs were organized where you can clarify the calculations under your agreement, make payments in cash and through the terminal using plastic cards, conclude and reissue an electricity supply agreement, get a certificate of calculations for electricity consumed, apply for a benefit for payment for electricity consumed, apply for verification of the meter’s operability, fill out an application for transferring settlements to a differentiated tariff for bp mennym periods, connect installations. Modern software has been introduced, communication channels have been expanded, devices for automatic notification of subscribers and other technical means have been installed that can fully satisfy consumer requests. A video panel and an information terminal are installed in the visitor service hall, with the help of which the subscriber can independently see all the information using the personal account number. In addition, the opportunity to set a quality assessment of the services provided.