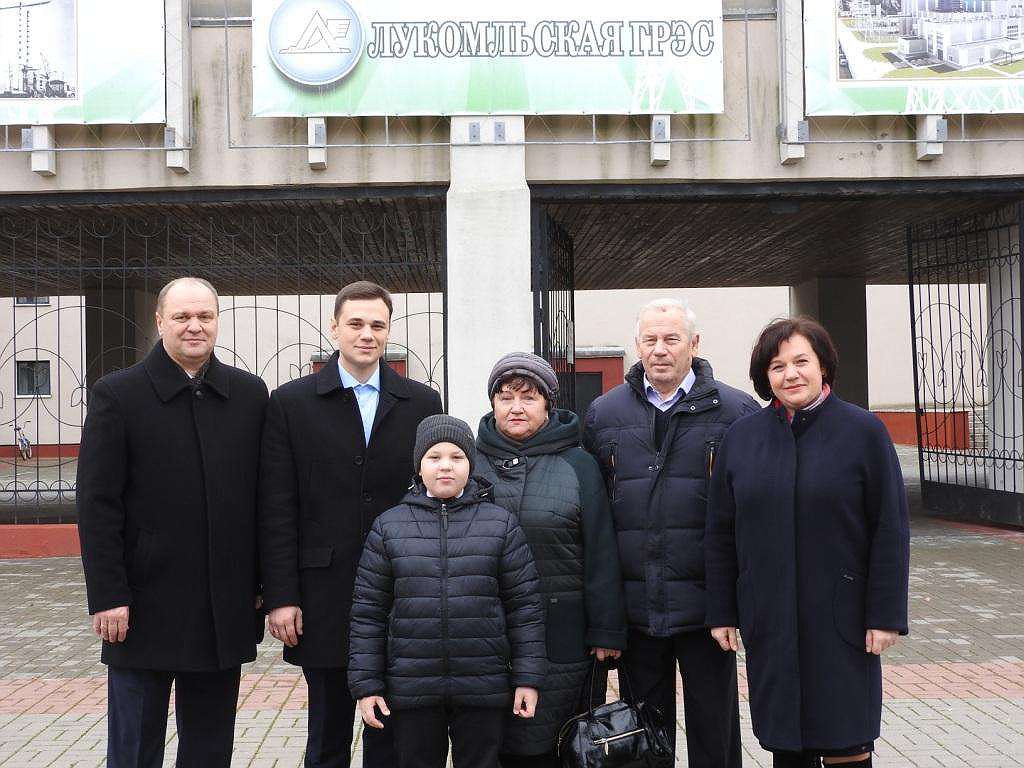 On the anniversary of the Lukoml state district power station.
It is worthy to continue the work of fathers and grandfathers.

In the 60s-70s of the 20th century, young people came from different parts of not only Belarus, but also the entire Soviet Union to the Komsomol shock construction site of the Lukoml State District Power Plant.

Active, positive, smart, friendly, enthusiastic, hardworking and responsible, they built a city, a station and their future. Here, many fell in love, created families, raised children. There have always been many couples at Lukoml State District Power Plant. Over time, their children replaced the parents in the workshops and departments of LGRES. And now, 50 years after the start-up of the first power unit, the grandchildren of the first Lukoml power engineers continue the work of fathers and grandfathers with dignity. It is about such dynasties in which at least three generations faithfully serve the Lukoml State District Power Plant, our story.

175 years.This is the general work experience of the Makarevich-Petrashko dynasty, the third generation of which is working at the Lukoml State District Power Plant, giving its flagship power system its knowledge, experience and experience.

Both families deserve to be a shining example of fidelity to calling. Thanks to the family union of the children working at the station now, two glorious surnames merged into one, multiplying several common achievements. And now the dynasty has four founders.

Unfortunately, Nikolai Petrashko is no longer with us. But his labor path is well remembered by veterans and current employees of the enterprise. The labor biography of Nikolai Nikiforovich at the Lukoml State District Power Plant began in 1972, when he headed the largest party organization in the energy sector. During the formation of LGRES, the party committee secretary considered the social and economic protection of workers to be the main task. And even having successfully worked for 6 years as the chairman of the Chashniksky district executive committee, he still returned to the enterprise, already to the position of deputy director. His wife, Valentina Ignatyevna, worked in kindergarten No. 1 for 30 years, and for 26 years - the head of the kindergarten.

Pyotr Makarevich is the father of another dynastic line, his work experience at the station is 42 years! Pyotr Viktorovich is proud that he not only exploited, but also built the Lukoml State District Power Plant: he graduated from the 4th year of the Belarusian Polytechnic Institute with a degree in thermal power, and during the practice worked on the installation of the first unit. And a year later, in 1970, among 4 BPI graduates, he arrived at the distribution station. After 2 years, his young wife Alla, a graduate of the Belarusian Technological Institute, came to the city of power engineers. Having arrived at LGRES, she devoted 35 years to a chemical workshop in which she worked as an apprentice, an engineer in an industrial sanitation laboratory, since 1978 - an engineer, and then head of a laboratory for fuels, oils and gases. The work of the Makarevichs was responsible, interesting and always brought joy and decent results.

Pyotr Viktorovich Makarevich has gone from an engineer in a setup workshop to a deputy chief engineer for the repair of basic power equipment. The difficult 90s are called serious not only a test, but also a leap in the development of the station. The period of work as the deputy chief engineer was remembered by Pyotr Viktorovich for significant events: the conversion of the station to natural gas; transition to a six-year cycle of repairs of the main equipment; large-scale modernization; start-up and development of a modern combined cycle gas turbine unit.

Now the Makarevichi spouses are on a well-deserved rest, but they do not have to be bored: they work in the country, keep a small apiary, are engaged in floriculture, and communicate with children and grandchildren.

The work of parents continues the middle and younger generation of dynasties. Roman and Olga Petrashko - husband and wife. Roman Nikolaevich is a senior repairman of equipment for the central heating system; he has been working at LGRES for 27 years. Olga Petrovna has been working as a planning economist at PEO for 18 years.

Their eldest son, Yegor, after graduating from Polotsk State University, has been working at the station for the second year, and now he is a lineman for boiler equipment. The young man intentionally returned to the Lukoml state district power station and decided to take root in his native city, he recently married. By the way, Yegor’s wife also works in the energy sector - she is a lawyer at Lukomlenergo-Montazh.

And this is not all the energy of the Makarevich-Petrashko dynasty!

The youngest daughter, Tatyana Makarevich, works in Minsk at RUE Belenergosetproekt. Yevgeny Petrashko, Roman’s younger brother, now lives and works in Vitebsk, but he and his wife also began their career on the Lukoml State District Power Plant: he is in the Central Resource Center, she is in the metal laboratory.

In this friendly beautiful family of power engineers, they are convinced that children want to follow in the footsteps of their parents when they really love their job. And reliable work allows you to have prosperity for the family and confidence in the future.

The youngest son of Roman and Olga, the schoolboy Dima, assures that he will also become a power engineer. So, the dynasty will continue.