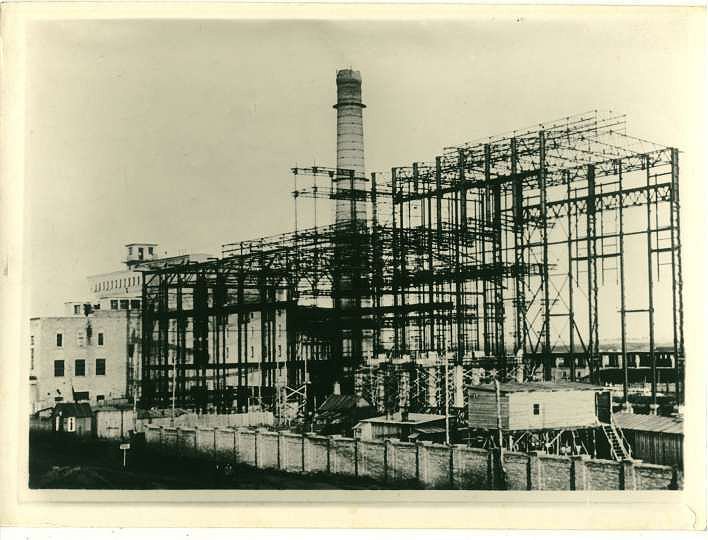 Vitebsk Thermal Power Plant has been providing electricity to the northern capital since 1954. Until 1941, the power supply of Vitebsk was carried out from the Belarusian State District Power Plant, built according to the GOELRO plan, according to the 110 kV transmission line. The heat load was provided by individual boiler plants of enterprises and municipal institutions of the city. Vitebsk was dynamically developing, famous for its factories, plants, landscaping, greenery and culture.

During the war, the city was almost completely destroyed. After his release in June 1944. Vitebsk revived from ruins. Created production required additional energy capacities.

On May 17, 1945, Decree No. 658 of the Council of People's Commissars of the Byelorussian SSR adopted the decision “On the construction of the Vitebsk city power station ...”.

The design assignment for the construction of the Vitebsk CHPP with the installation of a 6.35 MW turbine unit and two boiler units with a total steam capacity of 100 t / h was approved by the Main Energy Administration under the Council of Ministers of the BSSR by protocol No. 38 of September 27, 1947, fuel - milled peat.

Already in 1949, the foundation was laid for the main building. Since the start of construction, only a few people have been in the state of the CHPP: the director is K.S. Umetsky, the head of the vocational school is V.A. Tulchinsky, the engineers are S.V. Weiner, V.S. Malygin, warehouse workers I.Ya. Komarov, O .T. Bogdanova, driver Zarechto.

In June 1954, a team of leading, technical, adjusting and working personnel was formed with experience working at other stations. The head of the boiler room V.Z. Goldin arrived from the Smolevichi state district power station, the heads of the electric workshop G.S. Markov and the turbine S.E. Silkov, the master of the boiler room I.S. Azarenko, the boiler operators V.E. Eremenko, locksmith N.A. Zyppelt, duty engineers I.A. Bobkov, V.K.Dmitrakovich, as well as V.I. Medvedeva, I.D. Antonyuk, F.I. Markovich - from BelGRES. The workers in the workshop of the station came A.M. Ponomarev, G.N. Dolgin, R. B. Reuf, I. A. Bizunov, M. V. Ogurtsov, N. M. Davydovsky, M. F. Dorofeev.

It was a countdown time. The head of the REU adjustment service, D. B. Tsemekhman, was appointed the technical manager of the launch; commissioning of the turbine was headed by K. Markin. In the same year, graduates of universities in Minsk, Leningrad, and the Novomoskovsk energy technical school began to arrive at Vitebsk CHP. Young engineers A.N. Lisitsyn, A.E. Nesterovich duplicated the positions of DIS at the Belarusian State District Power Station, E.K. The duties of the head of the chemical workshop were performed by the engineer of the production service of Belorusenergo E.S. Rechina, which was later replaced by A. B. Sigal. The acting chief engineer was A.B.Bunis.

Vitebsk cogeneration plant as part of the Stein-Muller boiler st. The No. 1 and Air Force turbines (Brown Bover Company) was commissioned on December 27, 1954.

In connection with the increase in heat loads of the city in 1954, the USSR Ministry of Power Plants decided to build the second stage of the Vitebsk TPP.

The construction of the Vitebsk cogeneration plant made it possible to provide centralized heat supply to enterprises of the Pervomaisky district and the municipal sector of the city center.

Over the past time, the CHP team has done a great job to introduce advanced technologies, modernize equipment, save fuel and energy resources, and implement environmental measures. The constant development of the station made it possible to carry out reconstruction and expansion of large industrial enterprises of the city, located in the Pervomaisky district, and to create new ones. The history of the house-building and carpet factories, furniture factory, precast concrete plant No. 3, open joint-stock companies Vitebskdrev, KIM, Vitebsk radio components factory Monolit cannot be imagined without building the capacity of the Vitebsk heat and power plant, which in its class of heat and electricity generators is one of the leading in the republic.

And in the anniversary year, the power plants performed a number of serious equipment repair work. The event of the year was the technical re-equipment of the boiler BKZ 160-100 station number 3. It replaced the drum with a new one in order to increase the reliability of the boiler unit, as well as the control control system and extend the life of its operation. Automated metering of the temperature mode of operation of the boiler. All construction, installation and commissioning works at the facility were completed on time. In early December, tests were successfully completed, and now the modernized boiler unit carries a heat load.

Every year, new forces join the friendly family of the Vitebsk CHP - young specialists. The new generation of power engineers of the station is both hope and strength of the team, which is optimistic in striding through life, working stably and confidently!