The republican campaign "For Security - Together" started on April 2. 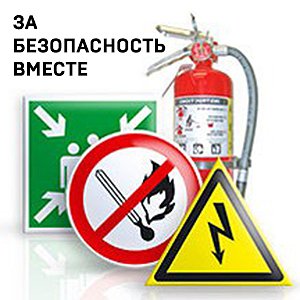 The republican campaign "For Security - Together" started on April 2.

From April 2 to April 19, 2019, a preventive campaign is held in the “For Safety Together” housing fund, in which various government bodies and organizations, including the Vitebskenergo RUE, take part.

The main goal of the action is to reduce the number of fires due to violations of fire safety rules in residential buildings and structures, settlements and territories. Particular attention will be paid to raising people's awareness of the capabilities of state organizations to provide services in the field of fire safety, strengthening the rule of law, preventing offenses committed by citizens intoxicated.

Representatives of the Ministry of Emergency Situations together with employees of republican government bodies, local executive and administrative bodies and other organizations will carry out work on training citizens in fire safety measures at home and at work. The emphasis will be on increasing the level of fire protection of houses and apartments. As part of the action, attics, basements, and common areas in multi-apartment residential buildings will be checked.

The action is also aimed at working with families where children are in a socially dangerous situation. Once again, attention will be paid to the inadmissibility of leaving children unattended. An explanatory work will be carried out on what to do and where to go, so as not to become a victim of a fire and not only.

RUE “Vitebskenergo” recalls that in order to avoid electric shock, it is necessary to know and follow the basic rules for the safe use of electric energy in everyday life:
● Installation and repair of electrical wiring, connection of new electrical equipment should be carried out only by electricians.
● Constantly monitor the good condition of the electrical wiring, safety shields, switches, sockets, lamp holders.
● Cleaning of lighting fixtures and lamps from dust should be done only in the absence of voltage (when the power is off).
● Observe the rules for using electrical appliances specified in the instructions for their use.
● Strictly observe the order of turning on and disconnecting electrical appliances from the mains: the cord is first connected to the device, and then to the network; shutdown is performed in the reverse order.
● Do not leave turned on appliances unattended.
When using any electrical appliance, you must not simultaneously touch the electrical appliance and grounded objects: radiators, water and gas pipes, a gas stove, metal structures connected to the ground. Particular attention in this regard should be shown when working with the washing machine, when a person with wet hands alternately (or maybe at the same time) touches the body of the machine and the bath.

When operating electrical wiring is prohibited:
● operation of household electrical equipment and wiring in a malfunctioning state, with broken insulation;
● temporary wiring, the use of home-made electrical appliances, power strips, etc .;
● paint over and whiten electric cords and wires;
● hang something on electrical wires;
● pull the plug out of the socket by the electric cord;
● twist and tie electric wires;
● lay wires and cords for gas and water pipes, for heating system batteries;
● allow electrical wires to come into contact with telephone and radio transmission wires, radio and television antennas, tree branches and roofs of buildings;
● seal open electrical wiring with paper, wallpaper, fasten wires with nails.

In apartments, when drilling walls, punching holes and grooves in them, driving in nails, screwing in screws, etc. Be aware of the danger of damage to electrical wiring made in stealth.

If there are signs of a fault in the wiring and electrical appliances, you should: immediately disconnect the appliance from the network, and if the wiring sparks, turn off the disconnecting device (circuit breakers); to troubleshoot, invite an electrician, and in case of damage to the appliance, show it to a specialist or bring it to a repair shop.

Explain to children the rules for using electrical appliances, limit the possibility of their unwanted contact with electricity: use sockets with a special rotary protective device or close the sockets with special plugs. Do not leave the plug in the power cord even if the appliance is turned off.